Arriving at the Heidelberger Hut on my first visit to the Alps in winter, what struck me immediately was how deep snow utterly transforms a landscape. Streams were frozen and buried and all other features obscured except where the rock was too steep to hold the snow or the scouring wind had exposed a few blades of frozen grass. Otherwise it was all whiteness and silence.

Two of us from Bremex along with six others from the British section of the Austrian Alpine Club had come up from Ischgl in a strange yellow vehicle with caterpillar tyres known as a ratrak. We were there for a snowshoeing improver course. Some of us had never been snowshoeing before, so the room for improvement was infinite. However, under the expert tutelage of our instructor, Hannes, we would take to it like ducks to water.

The hut, where we were to be based for the duration of the course, is situated at 2200m in the Silvretta range, just within Swiss territory but supplied from Ischgl, in Austria. It belongs to the Heidelberg section of the German Alpine Club, so is a hut in Switzerland owned by Germans and run by Austrians.

After dropping our luggage in the rather cramped dormitory we proceeded to the dining room for a hearty three-course dinner, served with a smile by the hut warden, Lois, and his friendly team. This, along with a buffet breakfast and packed lunch each day, was included in our course fee.

In the Gaststube (dining room)

Next morning in the seminar room Hannes explained the basics of avalanche risk management. The predicted risk for that day was level 3 (considerable), when about 50% of fatalities occur. This and continuing snowfall and wind dampened our expectations of what we could achieve when we set off on our first snowshoe foray later that morning. It was therefore surprising that we reached the 2792m summit of Piz Davo Sasse – a satisfying achievement on the first day. 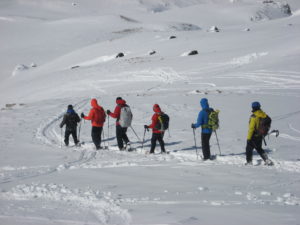 The highlight of the week was on Wednesday when the weather was great and we climbed the Breite Krone (3079m). Lots of other people – mainly ski tourers – were out and about, but we were lucky enough to have the summit to ourselves and fantastic views of the surrounding peaks. However, the sight of a rescue helicopter and a police ski patrol were a reminder of the risk. Several people had been caught in an avalanche in the next valley, the Jamtal, although thankfully all rescued. 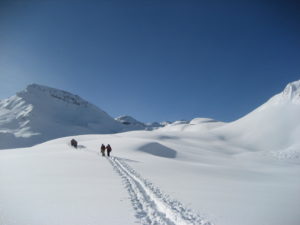 Heading for the Breite Krone

On Thursday the predicted avalanche risk rose to level 4 (high). This combined with further snowfall, wind and poor visibility ruled out any treks, so we practised avalanche rescue in the vicinity of the hut using transceivers, probes and shovels. This was great fun and seemed realistic in the deep snow.

The importance of learning these skills was brought home to us later that day when we heard some people had been caught in an avalanche on the track down to Ischgl. Fortunately everyone was again rescued, although one of them had suffered a fractured hip bone. The route to the valley remained blocked throughout Friday, the last day of the course. We departed on schedule next morning, but our ratrak came to a halt about half way down and we had to wait about 45 minutes for a snow plough to come and clear the way before we could continue to Ischgl and our onward journeys.

Many thanks to Hannes, to Lois and his team and to Gabi at the Austrian Alpine Club office in Innsbruck for making this an instructive and enjoyable week. We had learned a lot about snowshoeing, but a great deal more about avalanches.