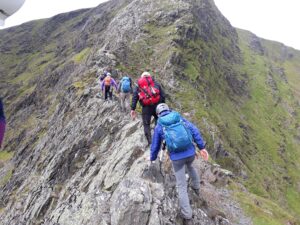 When Bremex stayed at Scales in July last year the weather was horrendous so we had to abandon our plans to go scrambling and just went walking instead. 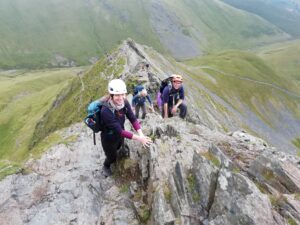 Our trip based at the same location this year couldn’t have been more different. The weather was perfect, so in accordance with our plan for the weekend we did Sharp Edge, a grade 1 scramble, on the Saturday and a grade 2 scramble on crags near Helvellyn on the Sunday. 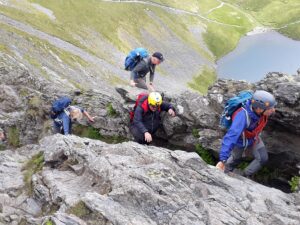 We were definitely a mixed ability group, with one person who had never done any scrambling before, at least not in the last 20 years. Thanks to the benign weather conditions he found Sharp Edge a good introduction – challenging enough to be interesting but not too scary – managing to complete the route without the need for a rope or any kind of assistance other than a few words of encouragement. 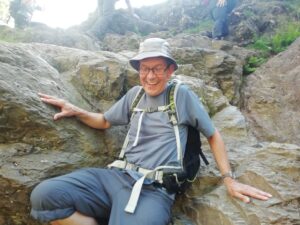 After topping out we continued to the summit of Blencathra, then descended via Blease Fell to Threlkeld, where we had tea and cake in the village hall. Our return route to Scales was along the path skirting the flank of the fell. This included a short scramble down steep rocks to cross Doddick Gill, which added a bit of interest and challenge towards the end of the day’s walk. 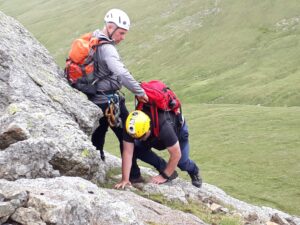 On the Sunday we drove via St John’s in the Vale to Swirls Car Park. We first ascended the popular path alongside Helvellyn Gill then, just below the 600m contour, veered left to find the Stepped Ridge on Browncove Crag. This offered a mixture of grade 1 and 2 scrambling, which enabled different members of our group to take slightly different routes depending on their abilities and inclinations. We climbed mainly unprotected, but at some points used gear to practise skills and/or make it possible for less experienced people to get over the tricky bits. For part of the ascent we had the company of a ring ouzel, who undaunted by our presence.

After reaching the top of the crag we rejoined the main path and continued to the summit of Helvellyn, where a young couple were selling tea, coffee and cake to raise money for charity, having hauled everything up the hill in their rucksacks.

The weekend ended with a very pleasant descent to the car park, which we reached at about 3pm.

The accommodation in the bunkhouse at the White Horse, Scales was comfortable and the food and beer in the pub were good too.