Bremex members Jude and Clive had a great time the first weekend in May backpacking part of the Offa’s Dyke Path between Knighton to Kington. The trip was so successful that club plans to arange a similar kind of meet – backpacking along a linear route – in future.

Click here to see the route Jude and Clive took on the Saturday: 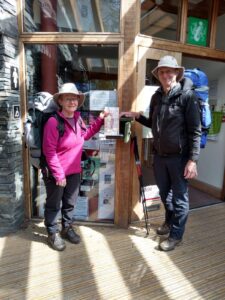 We took an early train from Chester and arrived at Knighton with the intention of starting the walk at 10.00am. First we called into the Offa’s Dyke Museum for a cup of tea and were invited to pose for a photograph for the Offa’s Dyke Society, who were holding their AGM and launching their new route card (you stamp the card for each section you complete). They wanted a photo of walkers using the card for their publicity. So our late start had become later and we were glad we had planned a modest distance for the day. 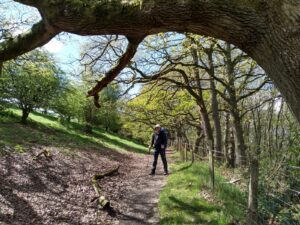 The path quickly rises out of Knighton and soon brought us alongside the impressive earthwork of the Dyke. All weekend the weather stayed fine and there were great views of wonderful rolling hills across England and Wales. There was a cool breeze from the north, but we were mainly heading south with this on our backs. 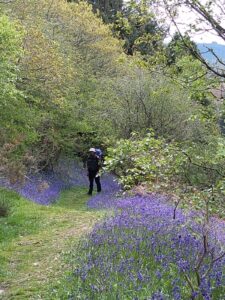 Apart from the Dyke itself, the highlight of the weekend was the flora. Many late spring flowers lined the path, including masses of glorious bluebells. The first night’s camp was at Gumma Farm, which is a working beef, sheep and chicken farm, and conveniently situated near the Offa’s Dyke Path. We had an idyllic pitch to ourselves in the adjacent apple orchard. The nearby town of Presteigne offered a good choice of pubs and the opportunity to walk without packs across the fields in a 5km round trip to get our evening meal.

The next day we walked a kilometre or so down the lane to pick up the Offa’s Dyke Path again. Gradually we gained height and then enjoyed a broad ridge heading south. The terrain continued to be very varied: woodland, streams, plantations and grazed fields.

We lunched in the lee of a plantation that offered so much shelter that after finishing eating we fell asleep in the sun .

Soon we were looking down on Kington and a meandering path through the golf course took us into town. The end of an arts and crafts fair provided interest as we wandered through the streets to find the campsite on the recreation ground. Beyond a few static caravans we found the campers’ field which was deserted and bounded by a large curve of the river. Another perfect pitch!

Kington has a good number of pubs and fast food outlets. We soon settled on eating at the nearest hotel where we had a lovely evening meal.

The third and final day saw us completing a circular walk, using the Offa’s Dyke Path up on Hergest Ridge. This flat-topped ridge was the site of an iron-age fort. More recently the Victorians used it for a race course and then, during the Second World War, the Home Guard dug trenches and held military exercises there. Traces of all this activity was clearly evident.

We returned to Kington using footpaths and lanes at the base of the ridge and walked through two historic villages, one of which had the grand remains of a motte and bailey castle. Finally, we passed through what must have once been the spectacular Victorian garden of a large country house. The vibrant azaleas were in full bloom and the many specimen acer trees in the arboretum were fascinating.

Over afternoon tea in a trendy Kington café we reflected on the many aspects of the weekend before taking a taxi to the nearest railway station at Leominster for our journey home. We had thoroughly enjoyed our three days of backpacking and seen many interesting things. The Offa’s Dyke Path offers so much more than an ancient earthwork.