At Top of Fichaille Ridge

Six people attended Bremex’s meet based at Aviemore Youth Hostel on the last weekend of Februay 2019. The Mountain Training Association had cancelled all winter assessments earlier in the week because of a complete absence of snow and ice, except in gullies and a few other sheltered places near the tops. This meant a change to our plan to practise winter skills, but we still got in two quality mountain days plus a good hill walk on the third day.

Sunday was less windy, but still overcast and cold. Having gauged ground conditions the day before, we attempted a scramble on the Fiacaill a’ Choire Chas ridge. Mindful of the differing levels of experience and competence in our group of six, we took a safety rope and three cams, but these were not needed as we were able to stick to grade 1 ground and avoid the more difficult grade 2 moves. Seeing other groups on the ridge reminded us of the benefit of being in Bremex and being able to learn from each other without the need for paid instruction. 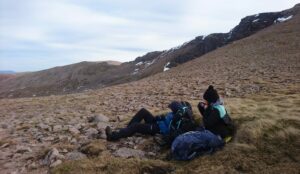 Having ascended the ridge we summited Cairn Lochan (1215m) then descended via an easy spur to get back to the ski centre car park. 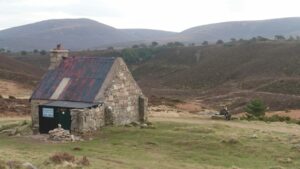 Two people stayed on until Monday and climbed the Corbett Meall a Buachaille (810m) from Glenmore village via the Ryvoan Bothy. They continued along the ridge to Creagan Gorm then descended through the forest via Badaguish Outdoor Centre to the road. En route they met wild swimmers and an ornithologist searching in vain for golden eagles. This was a great finale to a weekend that had been enjoyable and fulfilling despite the absence of winter conditions.